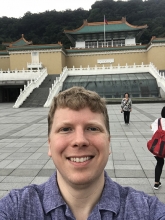 In eukaryotic gene expression, the RNA transcripts made from DNA genes are often highly modified before they mature in RNAs used for particular functions such as mRNAs, miRNAs, ribosomal rRNAs, or long non-coding RNAs (lncRNAs).  Most protein coding genes in humans contain exons and long non-coding regions called introns that are removed by pre-mRNA splicing. Splicing is carried out in two sequential transesterification reactions by the spliceosome—a highly conserved molecular machine comprised of ~100 core proteins and 5 small nuclear RNAs.  Spliceosomes must assemble quickly and accurately on RNA transcripts in order to ensure the fidelity of gene expression.  My lab is interested in how the spliceosome assembles and finds its RNA targets, how cells regulate this process in biology, and how perturbation of splicing can occur in disease or with next-generation therapeutics. 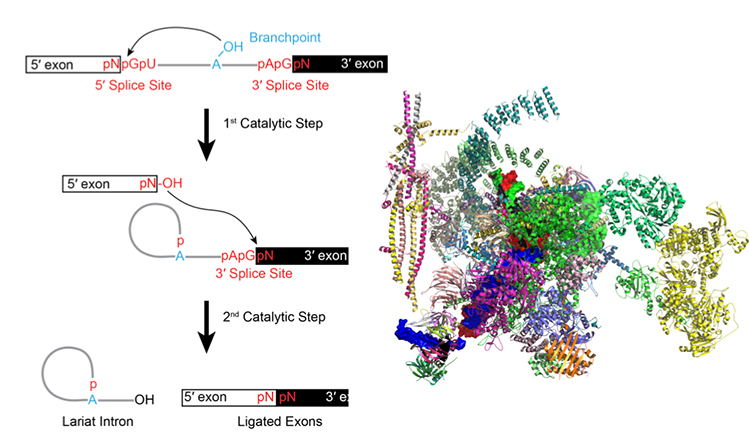 One challenge in studying splicing is that spliceosomes assemble and carry out reactions in a multi-step, uncoordinated process. This means that any one time there will be many different spliceosomes in solution doing many different things. To solve this problem, our laboratory often uses single molecule fluorescence microscopy.  These techniques allow us to follow individual spliceosomes in real-time in order to understand fundamental aspects of how these ribonucleprotein complexes assemble.   We often record movies of spliceosomes in action using custom-built fluorescence microscopes, such as the micro mirror TIRF microscope shown below. By using multiple lasers, we are able to follow two, three, four, or even five different components simultaneously.  This provides a wealth of data about biomolecular assembly reactions. 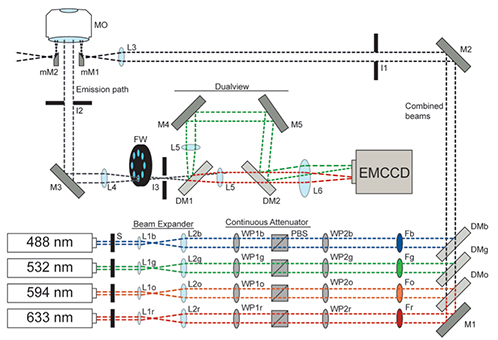 How does the spliceosome recognize introns?

The RNA sequences that are removed from pre-mRNAs (introns) must be recognized with nucleotide precision in order to preserve the reading frame of the mRNA.  We want to understand how this occurs at a molecular level and how the spliceosome is able to facilitate splicing of introns containing either weak or strong splice sites—a key feature of human alternative splicing and gene regulation.  For these studies, we have focused on ATP-independent recognition of the 5' splice site by the U1 snRNP and ATP-dependent recognition of the branch site by the U2 snRNP.  We use a highly interdisciplinary approach to tackle this problem including genetics, chemical biology, single molecule biophysics, biochemistry, and next generation DNA and RNA sequencing. 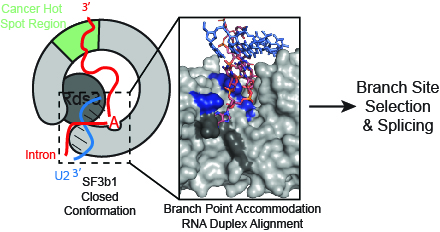 In our model for branch site selection, a key event is recognition of a RNA duplex containing a bulged adenosine nucleotide within a binding pocket of the protein SF3b1.  This may trigger SF3b1 closure and other events that are needed for spliceosome assembly and splicing.

How are ribonucleoproteins assembled?

In collaboration with Professors David Brow and Samuel Butcher at UW-Madison, we are exploring the fundamental pathways of ribonucleoprotein assembly.  We mostly have been focusing on the U4/U5.U6 tri-snRNP, the largest single subunit of the spliceosome. By combining multiple genetic, structural, biochemical, and biophysical approaches we hope to solve this challenging assembly problem.  We are particularly interested in protein and RNA co-folding during U6 snRNP assembly.

What new tools are needed for studying spliceosome assembly and catalysis?

In order to investigate the inner workings of cellular splicing, we often develop new chemical, genetic, or physical tools.  For example, we have developed methods for using DNAzymes to install fluorophores into long RNAs, RNA aptamers for fluorophore labeling or purification of ribonucleoproteins, and methods for preparing and injecting fluorescent RNAs into human cells. We are also thinking of translational research, in particular exploiting the high conservation of the splicing machinery and humanized yeast strains to discover new splicing inhibitors and potential drug candidates. 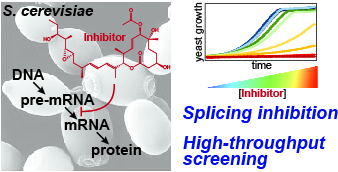