Protein folding in the cell and Biomolecular spectroscopy 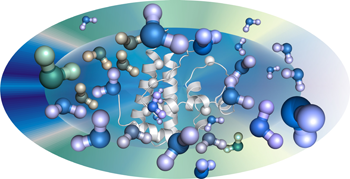 How does a protein with a given amino acid sequence manage to achieve its bioactive and amazingly organized three-dimensional structure? This process, known as protein folding, is one of the most fundamental yet poorly understood events in chemistry and biology. Most studies performed in the past have focused on the in vitro folding of full-length biopolymers starting from unfolded states generated by high concentrations of denaturants or high temperature. However, these types of unfolded states rarely exist in living cells! Moreover, polypeptide chains start sampling conformational space (and possibly even fold) way before the protein amino acid sequence has been fully synthesized, during a process known as translation. In order to fully understand protein folding, it is therefore important to take the cellular context into account. This is even more important in the case of protein misfolding, i.e., folding gone wrong, which leads to protein aggregation and several deadly neurodegenerative and brain disorders such as Alzheimer's disease, spinocerebellar ataxia and Huntington's chorea. Thus, understanding protein folding/misfolding will lead to both fundamental knowledge and long-term benefits to human health. 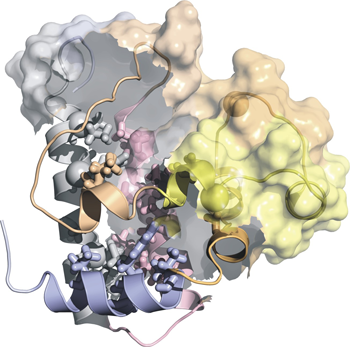 Students, postdocs and staff members in the Cavagnero group are engaged in exploring the fundamental principles of protein folding and misfolding in the cell. All the studies are performed at atomic or molecular resolution under physiologically relevant conditions. We use a combination of tools from spectroscopy, chemical biology, biochemistry and computation.

The highly interdisciplinary environment in the Cavagnero group encourages students to acquire a wide combination of skills ranging from biology to physical chemistry, develop independent problems solving skills, and be very coooperative with others. Students who graduated from the Cavagnero Group have taken a variety of positions in both academia, teaching and industry, including research positions at Universities and colleges, and employment in pharmaceutical companies and National/Federal laboratories. 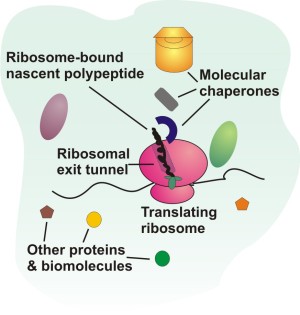 Our group is involved in the study of fundamental questions in protein folding, including the role of water and hydrophobic collapse in vitro and in the cell, the effect of amino acid sequence on structure, the role of the protein's C terminus in folding, kinetic trapping events across the folding energy landscape, the kinetic and thermodynamic balance between protein  folding, misfolding and interaction with molecular chaperones.

Cotranslational protein folding: conformation and dynamics of ribosome-bound nascent polypeptides
The earliest stages of a protein's life are crucial for its ability to function in the cell. Our group is doing pioneering studies on the folding of proteinsas they emerge from the ribosome by a combination of time-resolved fluorescence, NMR, mass spectrometry-detected H/D exchange and biological assays.

The role of molecular chaperones in protein folding and misfolding
Both the research directions outlined in sections 1 and 2 are pursued in the absence and presence of cotranslationally- active chaperones. We are also performing model studies with purified chaperones such as Hsp70, to specifically explore whether chaperones act merely by preventing misfolding or play an active role in the folding of their substrate. This work is carried out primarily by multidimensional NMR on 15N- and 13C-enriched polypeptide substrates and involves both high resolution kinetics and structural/dynamic analysis.  We are also exploring the role of molecular chaperones in human neurodegenerative diseases.

Development of new laser-driven methods in NMR spectroscopy
The group is engaged in developing novel methods to enhance the power NMR spectroscopy for the analysis of biological systems, including novel methods to boost NMR sensitivity, new approaches to overcome undesired NMR resonance line-broadening due to conformational exchange in the intermediate chemical shift timescale, and methods to site-specifically study the role of water in protein folding. Ongoing efforts include the development of laser-driven techniques based on photochemically-enhanced dynamic nuclear polarization (photo-CIDNP) and its application to heteronuclear correlation spectroscopy in 15N 13C isotopically enriched samples.