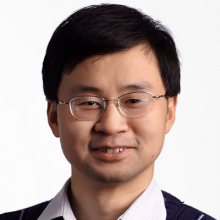 Research in the Jin group is centered on the chemistry and physics of nanomaterials. We develop rational strategies for chemical synthesis, assembly and integration of nanomaterials, and investigate fundamental synthesis-structure-property relationships, especially through device fabrication and characterization, and finally develope them for various applications. We apply vapor-phase, solution-phase and solid-state nanomaterials synthesis, as well as "traditional" inorganic synthesis of single source precursors.  We are interested in nanomaterials for renewable energy conversion, such as photovoltaic and thermoelectric energy conversion, and the applications of nanomaterials in biotechnology. Summarized below are our on-going research areas: 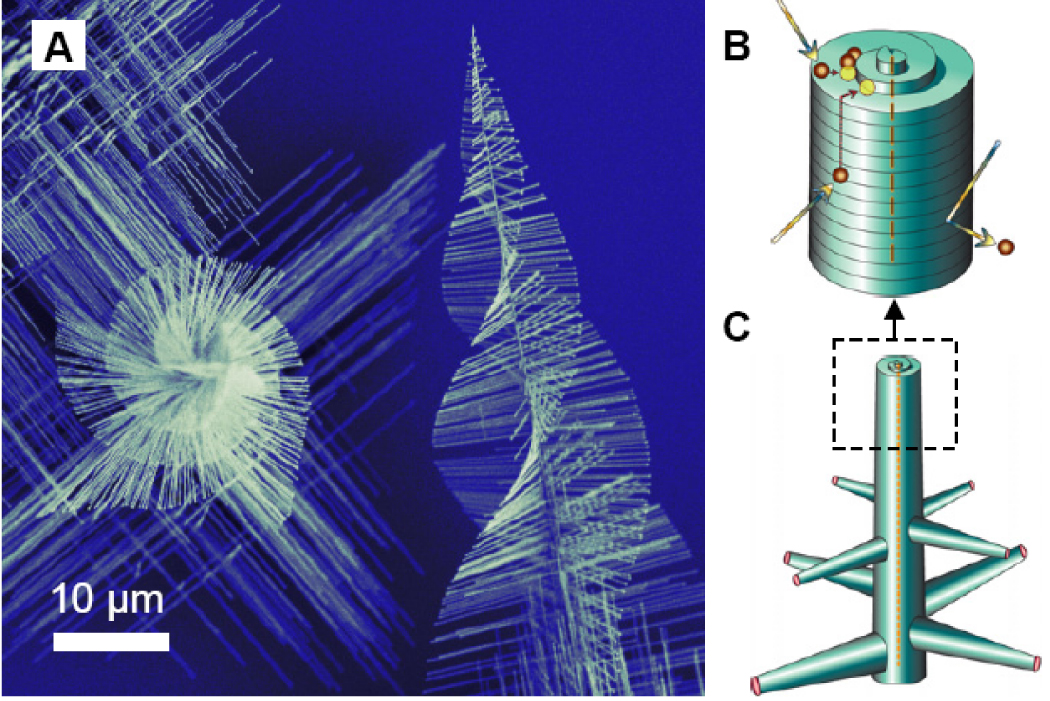 These fascinating trees with rotating branches are the clearest demonstration of "Eshelby twist" - the rotation of a crystal lattice around a screw dislocation as the consequence of its associated stress. We have further elucidated the growth of single-crystal nanotubes due to screw dislocations with large Burgers vectors. Using fundamental crystal growth theory and its prediction on growth kinetics, we confirm that the anisotropic crystal growth of these 1-D nanomaterials is indeed driven by screw dislocations. Dislocation-driven NW growth is a general mechanism that has been greatly under appreciated and it can explain a variety of nanoscale morphologies that are commonly observed. The general understanding on promoting dislocation-driven nanomaterials growth will open up the exploitation of large scale/low-cost solution growth for rational catalyst-free synthesis of 1D nanomaterials for a variety of large-scale applications, such as those for renewable energy. This discovery and our continuing study will create a new dimension in the rational design and synthesis of nanomaterials.

General chemical synthesis of metal silicide nanowires and their applications in enhanced thermoelectric materials
Nanomaterials extensively studied so far are usually made of elements or prototypical compound semiconductors with simple stoichiometries. In contrast, intermetallic compounds such as metal silicides have multiple and unpredictable stoichiometries and complex phase behavior, making them challenging to synthesize and rarely explored so far. However, novel NW materials of silicides have significant applications in nanoelectronics, nanospintronics, and thermoelectrics. To overcome such previously unaddressed complexity, we developed general synthetic approaches to silicide NWs using chemical vapor deposition (CVD) of single source organometallic precursors (SSPs) and a complementary chemical vapor transport (CVT) method to reproducibly deliver both silicon and metals with stoichiometric control. We are systematically investigating families of SSPs and working on elucidating the detailed NW growth mechanism and the chemical rules governing the formation of the nanoscale intermetallic phases, towards the goal of rational synthesis of nanomaterials of any pure or alloyed metal silicides. NWs of those semiconducting silicides with complex crystal structures, such as MnSi1.8, are very promising as improved thermoelectric materials. We are investigating how nanoscale dimensions in these namomaterials impact their fundamental thermal properties. Metal silicides are also abundant, inexpensive, and robust, therefore promising for practical thermoelectric applications. We are exploring silicide nanowires and other nanomaterials and their bulk nanocomposites as high performance thermoelectric materials for practical applications.

Nanomaterials for renewable energy applications
Nanotechnology offers new approaches to solar energy conversion that promise higher efficiencies and lower costs. The complex hierarchical nanowire structures we have demonstrated are promising candidates for effectively harvesting solar energy because the scattering improves light absorption and the dendritic structure optimizes carrier collection; yet their actual applications can be challenging due to the dramatic departure from the conventional planar junction solar cells. We are exploring various approaches to utilize such nanostructures for photovoltaics and photoelectrocatalysis. We utilize our understanding the screw-dislocation driven NW growth to develope nanomaterials of more abundant and stable semiconductor materials that can be carried out on a large scale in an economical manner.

Bioinspired assembly of functional nanoscale materials
We apply the biomimetic principles derived from biomineralization processes to the assembly of nanoscale functional materials into nanoscale systems. In biomineralization, "matrix" macromolecules can efficiently induce nucleation of inorganic species into crystals at specific locations with controlled size, morphology, and growth orientation. By carefully controlling surface organic molecules, we demonstrated the nucleation and assembly of semiconductor arrays on flexible polymer substrates directly from solution and exploited them for large-area macroelectronic applications. Truly nanoscale bottom-up assembly is realized by using self-assembled nanostructured block copolymers and sequenced biopolymers, such as synthetic collagen and b-peptide nanofibers, as templates. We are also investigating how organic molecules influence the crystal growth morphologies.