Molecular beam scattering experiments have blossomed into a universal technique for understanding and controlling reactions in the gas phase and on solid surfaces. Our research confronts a third frontier: reactions at the surfaces of pure liquids, solutions, and monolayer films. We use gas-liquid scattering experiments to explore collisions and reactions of gas molecules with liquids ranging from crude oils and liquid metals to pure and salty glycerol, sulfuric acid, and molten sodium hydroxide and sodium carbonate. These liquids are important industrially and in the atmosphere, where sulfuric acid aerosols play a role in ozone destruction. We are now embarking on experiments employing liquid microjets, which open up the possibility of investigating reactions with high vapor pressure liquids including hydrocarbon fuels and water itself.

The questions we ask are simple: what does the surface of a liquid "look like" atom by atom and "feel like" during the short time scale of a gas-liquid collision? How does an acidic molecule such as HCl dissolve and dissociate in protic liquids such as glycerol, sulfuric acid, or salty water? What are the interfacial analogs of hydrogen bonding, the "like dissolves like" rule, oxidation-reduction, acid-base reactions, and electron solvation?

Molecular beam scattering experiments can answer these questions. We direct a highly collimated and nearly monoenergetic beam of molecules at the surface of a continuously renewed, low vapor pressure liquid inside a vacuum chamber. These gases range from inert atoms and organic molecules to HCl, SO2, and alkali atoms. After striking the liquid, the molecules either scatter from the liquid or stick and dissolve, perhaps reacting with solvent molecules in the interfacial region of the liquid. A fraction of the reaction products may then desorb into the vacuum. The identity of the recoiling and desorbing molecules and their direction and velocity are monitored by a mass spectrometer. In many cases, we also measure interfacial and bulk reaction probabilities and the residence times of the gas molecules in the liquid. The data allow us to develop a true "blow-by-blow" description of the ways in which these gas molecules bounce off, dissolve in, and react with each liquid. 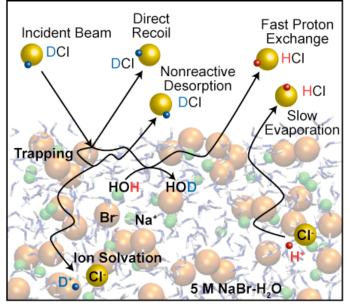 One example is shown in the graphic on the right, which depicts collisions of DCl molecules with salty water. These collisions lead to the dissolution of this acidic gas and its dissociation into solvated ions.  Our most surprising discovery is a pathway that occurs in collisions of DCl with salty glycerol: for this liquid, a small fraction of the DCl molecules undergo rapid DCl®HCl exchange in the top few monolayers of the solution and then desorb as HCl before they dissolve in the bulk. This is one instance in which an interfacial reaction competes with bulk dissolution.

Our studies bring together the most recent advances in reaction dynamics and theories of liquid structure and reactivity. By carrying out controlled collisions between a gaseous solute molecule and a liquid solvent, we are helping to construct an intimate picture of chemical reactions at gas-liquid interfaces.