Our research focuses on computational and theoretical studies of soft condensed matter.  While it is clear that the short-range structure of complex fluids plays an important role in determining the physical and chemical properties, the complexity of these systems makes modeling them on an atomistic level computationally challenging.  A judicious choice of coarse-grained models that hopefully capture the essential features without incorporating much of the detail is therefore a crucial step in the theoretical study of these systems. We are interested in constructing such models, and then employing liquid state theory, computer simulation, and machine learning to investigate their properties, with the final aim of predicting experimental observables.  Our research has two components: the development of force fields and methods, and the application of these to understand the structure and dynamics of condensed phases. Some areas of current interest are: 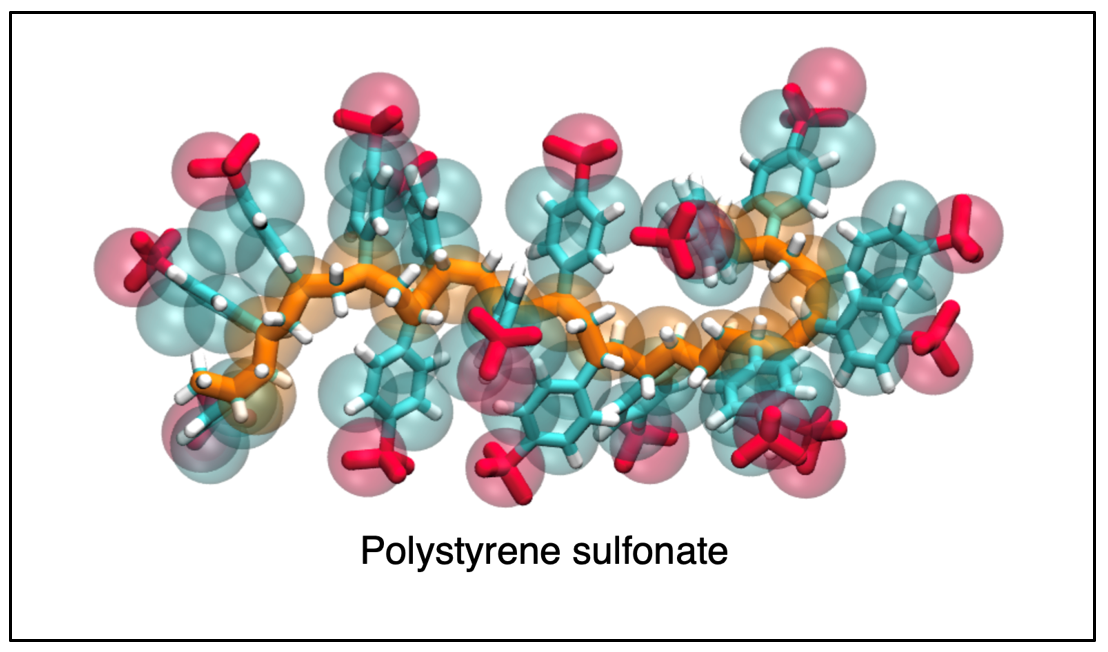 Polyelectrolytes are an important and interesting class of soft matter. Their fundamental interest arises from the fascinating range of properties they can display.  For example, single polyelectrolyte chains are predicted to display a wide range of conformations including rods, globules, pearl-necklace structures, torii, and helices depending on the balance between electrostatic and solvent induced interactions and the local chemistry of the molecules.  Their practical importance arises from the large number of applications; the worldwide production of super-absorbent polymers alone was 850000 metric tons in 1999.  They are also important as biological molecules such as proteins, sugars, and nucleic acids. The study of polyelectrolytes therefore spans diverse areas and has seen active research

Polymer coacervates are composed of charged polymers (polyions), usually one positively charged species and one negatively charged species, their associated counterions, and added salt. They display liquid-liquid phase separation that is affected by many factors such as ionic strength, pH, the molecular weight of the polyions, and temperature. Coacervates can also be formed with protein/polymer and colloid/polymer mixtures, and with polyampholytes.

The behavior of polymers is complex solvents, such as room temperature ionic liquids or deep eutectic solvents, is interesting from both a fundamental and practical perspective.   The fundamental interest arises from the fascinating sensitivity of polymer behavior to the solvent conditions.  The practical interest arises from the possibility of using the polymer as a scaffold for the working fluid solvent, or from the possibility of fabricating nanostructured materials by tuning the solvent properties. 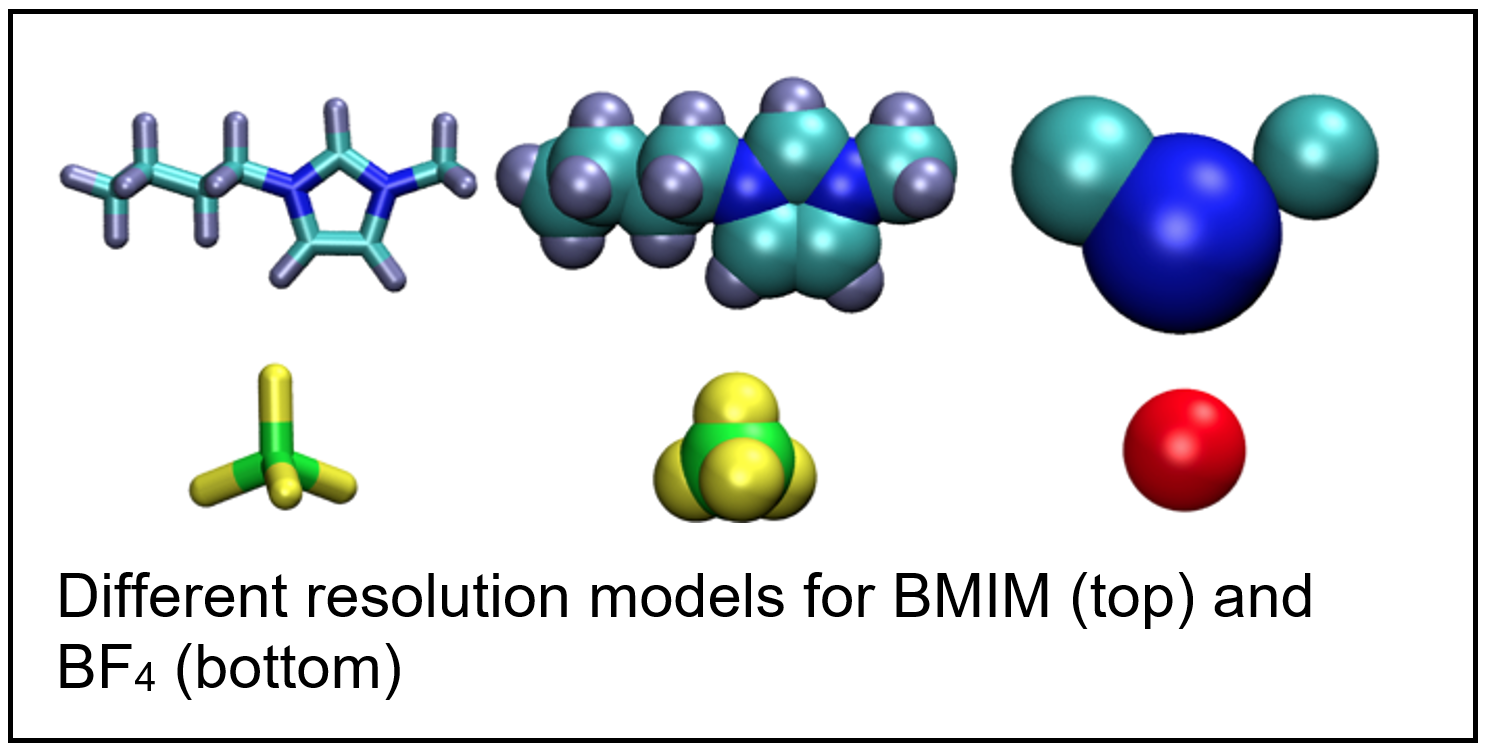 Ionic liquids (ILs) are usually composed of a large organic cation and a small organic or inorganic anion and are liquid at room temperature (hence they are often referred to as room temperature ionic liquids or RTILs).  They possess a number of interesting and important physical properties such as low volatility, non-flammability, high conductivity, and thermal and chemical stability.

Deep eutectic solvents (DES) are obtained via the complexation of a quaternary ammonium salt with a hydrogen bond donor.  This results in a depression of the freezing point similar to what is seen in eutectic mixtures of metals.  A classic DES, called reline, is a mixture of choline chloride (ChCl) and urea.  ChCl and urea have melting points of 302oC and 133oC, respectively, but a 1:2 molar ratio (reline) has a melting point of 12oC3a.  DESs have many of the properties of ILs including non-volatility, conductivity, and biodegradability.  They do not suffer from toxicity and cost issues.

We are working on understanding the conformational properties, dynamics, and phase behavior of polymers in ionic liquids and DES.  We start with the development of a first-principles force field, coarse-grain this to obtain a model for which long simulations can be performed, and then use machine learning methods to obtain the phase behavior.

Designing battery electrolytes for lithium-ion batteries has been a topic of extensive research for decades. The ideal electrolyte must have a high conductivity as well has high Li ion transference number, i.e., fraction of current carried by the Lithium ions. The conductivity is very sensitive to the nature of the anions. For example, Lithium bis(trifluoromethane) sulfonimide (LiTFSI) has a high conductivity, but the chemically similar Lithium trifluoromethanesulfonate (LiOTf) shows poor conductivity.   In our group we are developing atomistic and coarse-grained force fields to study the effect of solvent and anion types on the dynamics of Lithium ions. 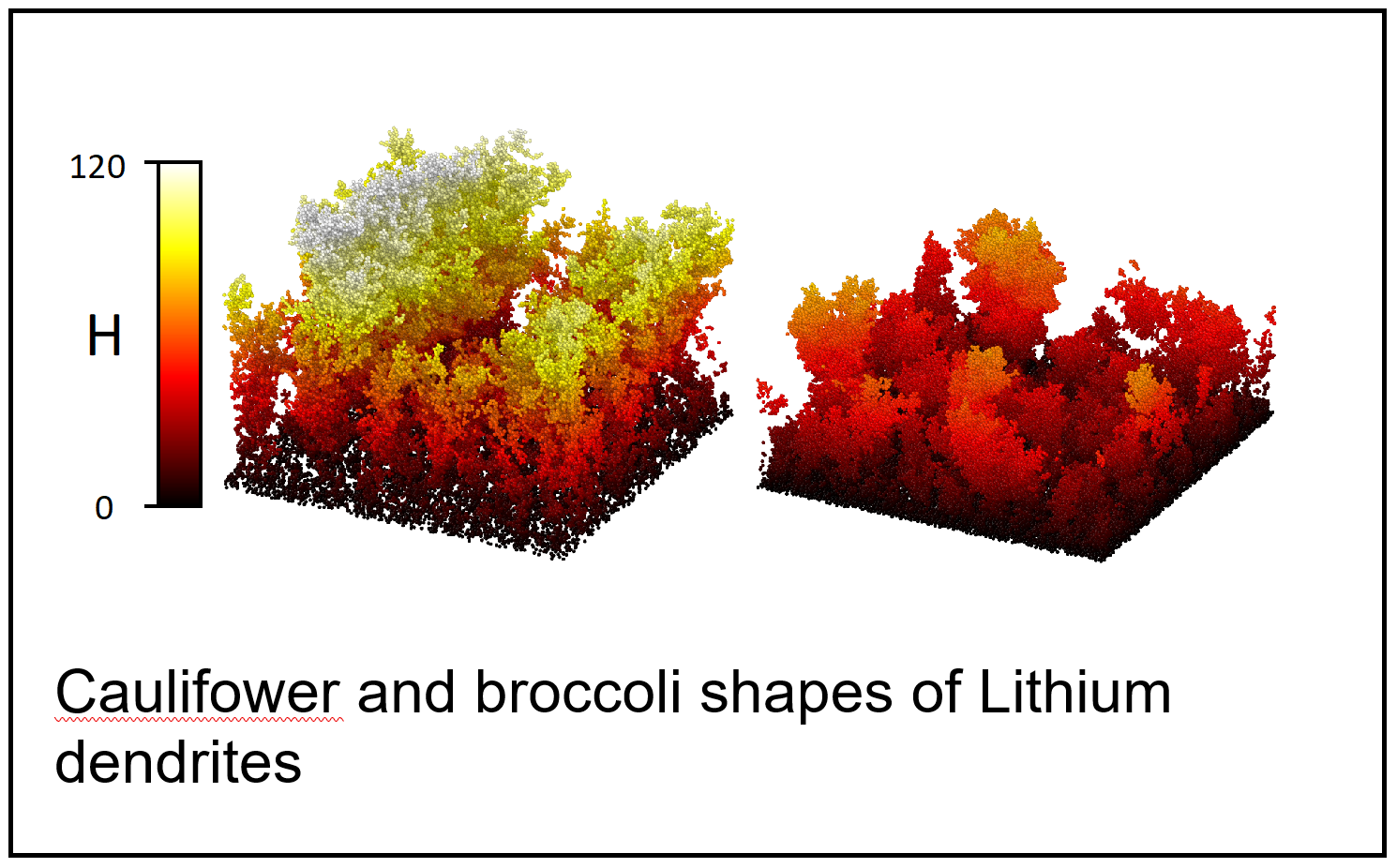 A challenging and longstanding problem is the formation of Lithium dendrites in batteries.  We are using very coarse models in an effort to elucidate the general principles behind dendrite formation and growth.  In a simple model where the Lithium ions are spheres, and the rest of the electrolyte is a continuum we find that the important effects are due to the self-diffusion constant and the local electric field.   The dendrites transform from a cauliflower to broccoli shape as the diffusion constant and electric field decrease.  We are working towards obtaining a molecular explanation by connecting these studies to the simulation studies using more detailed molecular models.